How To Build a Chat App Using WebFlux, WebSockets & React

WebFlux is one of the standout features of Spring 5.0, which is a functional web framework alternative to Spring-MVC, built on top of Reactive principles. This post will look at how to build a basic chat application using WebFlux on the server to handle incoming WebSockets and React on the front end.

What is Reactive Streams & WebFlux

Fundamentally, Reactive Streams defines a specification for asynchronous processing of streams. WebFlux uses Reactor underneath which implements the reactive streams specification. Reactor defines the 2 basic building blocks, Flux & Mono that WebFlux uses to deal with streams of HTTP requests or WebSocket messages. In a nutshell, a Flux represents a stream of values ranging from 0..N and a Mono from 0..1.

The major application of Reactive Streams lies in the ability to build non-blocking programs that require only a small number of threads to scale. Traditional Servlet Spec applications use a request-per-thread model. That means for every HTTP request a thread is allocated to process it. Should that particular request run an expensive database query or communicate with an external service, the allocated thread will block while it waits for a response.

Contrast that to a reactive application, where the request is seen as an event being processed by a shared pool of threads. If the request depends on an external service, the specification provides an efficient way to release that thread until the resource completes, freeing it up to process other requests or deal with any other events in the system. Once the resource completes, it is seen as a separate event that will be processed by one of the shared threads and subsequently complete the original HTTP request.

The sample chat application can be cloned from GitHub. In order to build the application npm 4.1.2 and node 7.7.1 needs to be installed in the environment, the Gradle build will delegate to these binaries to assemble the UI. The application was built using spring 5.0.0.RC2 and spring-boot 2.0.0.M2.

After the server has started the application can be accessed at http://localhost:8080

In WebFlow, WebSockets are handled by implementing WebSocketHandler. The handler is provided with a WebSocketSession every time a connection is established. A WebSocketSession represents the connection made by a single browser. It has 2 Flux streams associated with it, the receive() stream for incoming messages and the send() stream outgoing messages.

Since not all clients will connect at the same time, the publisher is configured to retain the last 25 messages and replays it to any new subscribers. 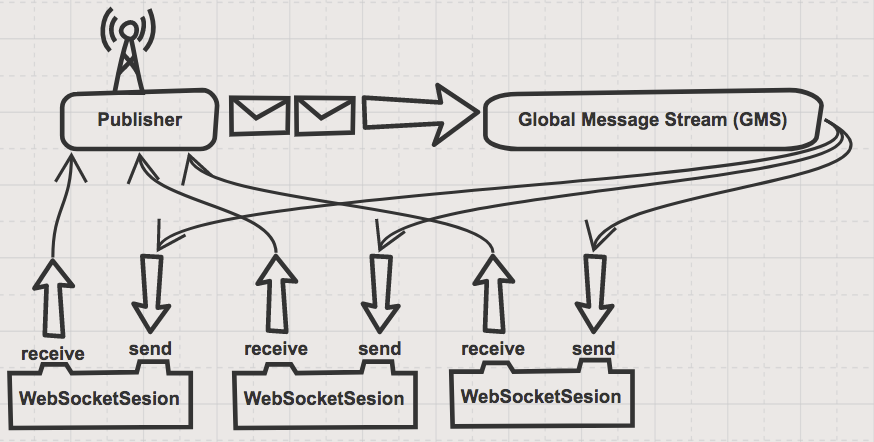 To enable WebSocket connections through WebFlux, a SimpleUrlHandlerMapping can be used. It maps a WebSocket URL to an implementation of a WebSocketHandler. One thing to note is the explicit order of the HandlerMapping, omitting the order causes the mapping to clash with the RouterFunction configuration that deals with HTTP requests.

A key feature of any chat application is notifying all clients when one client disconnects. This can be achieved by publishing a Disconnect Message on the GMS when the subscriber to the WebSocketSession receives an onComplete signal.

Collecting basic stats like message count for each user and when the last message was sent can be achieved by registering another subscriber to the GMS. The subscriber can collect the information by filtering the different types of messages flowing through the GMS. In the sample app, the UserStats class collects stats and emits it to all the users via a new message on the GMS whenever a new client connects to the chat application.

The front end is a simple React with Redux application. Redux middleware manages the lifecycle of the WebSocket connection. Whenever an action of type WEBSOCKET_CONNECT is dispatched, the middleware connects to the WebSocket URL in the payload. Similarly, the WEBSOCKET_SEND action will send the payload as a JSON string over the WebSocket. The source for the React application is included with the rest of the sample code on GitHub.

There is a big paradigm shift from the traditional request processing model that you expect to see with Java Servlet Spec based applications. While it may take a while to fully understand how to deal with HTTP Requests or WebSocket messages as a Flux of events, the benefits are considerable. Not only will applications built this way scale better than the request per thread model, but it will benefit from the rich set of functionality that comes with the reactive streams API. The UserStats and replay of recent messages demonstrates some of the capability included in the API. 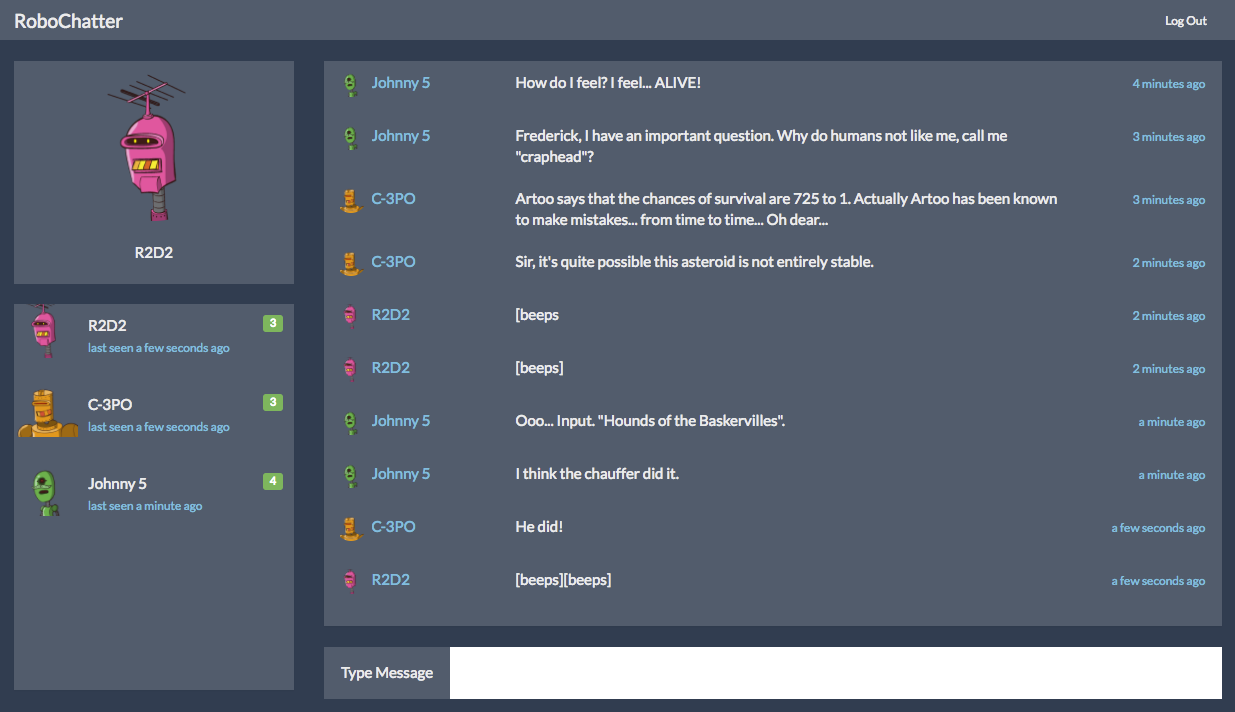