To distribute an add-on repository, a specific folder structure needs to be exposed over HTTP. At the root of the structure is addons.xml that indexes the add-ons contained in the repository. Every add-on is placed in a subfolder that matches its id and contains 4 files:

A Kodi repository is also packaged and installed as an add-on. 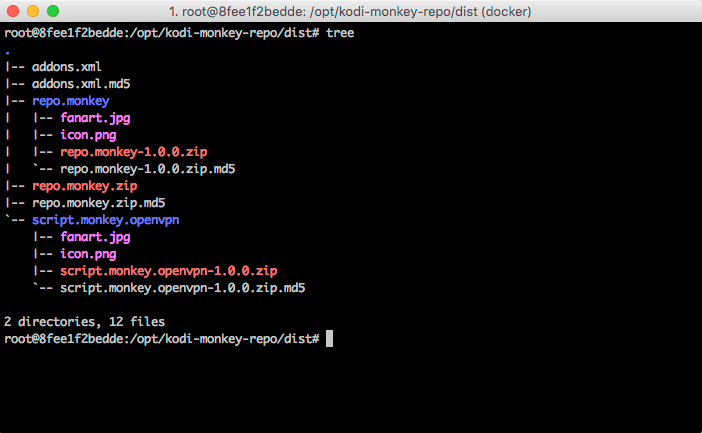 A basic script add-on consists of an addon.xml file and a python script that acts as an entry point. Custom window xml files are placed in resources/skins/default/720p/. 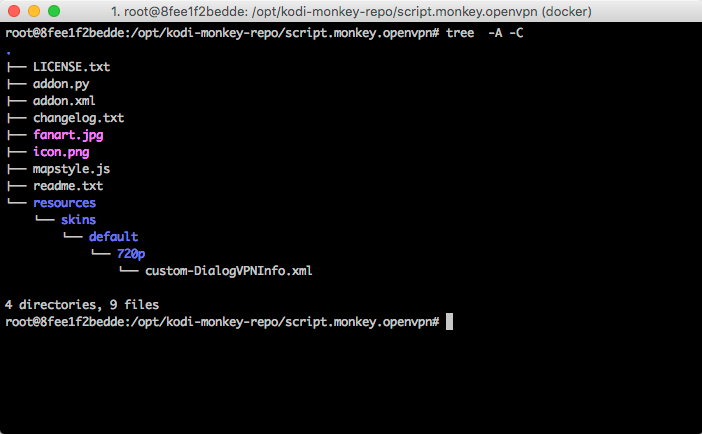 The kodi-monkey-repo is structured to contain the source for every add-on in a subfolder. Executing the addons_xml_generator.py python script, will produce the Kodi add-on repository structure in the dist folder. Pushing the dist folder to Github simplifies sharing the repository with the Kodi community. 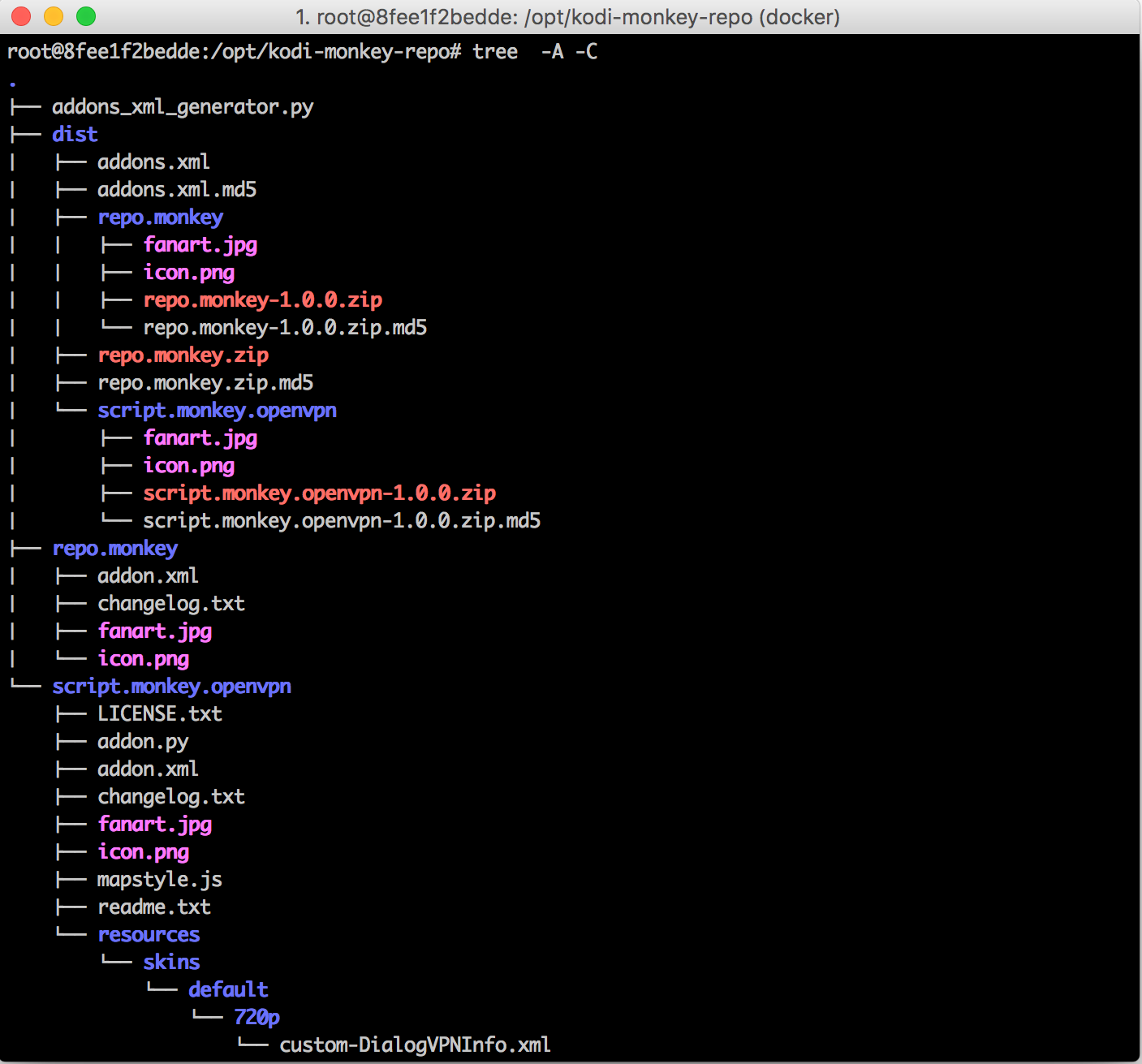 Kodi dev is a Vagrant project that builds an Arch Linux Virtual Machine (VM) with a clean Kodi installation. This provides the perfect environment for developing an add-on.

Vagrant will automatically mount the working directory on the host to /vagrant on the VM. Placing the git repo here makes the source visible to the VM.

Once the repository and the add-on is installed, you can symlink the installed source back to the git folder mounted under /vagrant on the VM.

From this point onwards, changing the source on the host machine will reflect in Kodi, when you re-run the add-on.

This section covers a few examples of how to do the most common things in a script.

I started with the Hello World Add-on example and then progressively modified it to develop the OpenVPN Add-on.

This file describes the add-on to Kodi, including how to execute it. 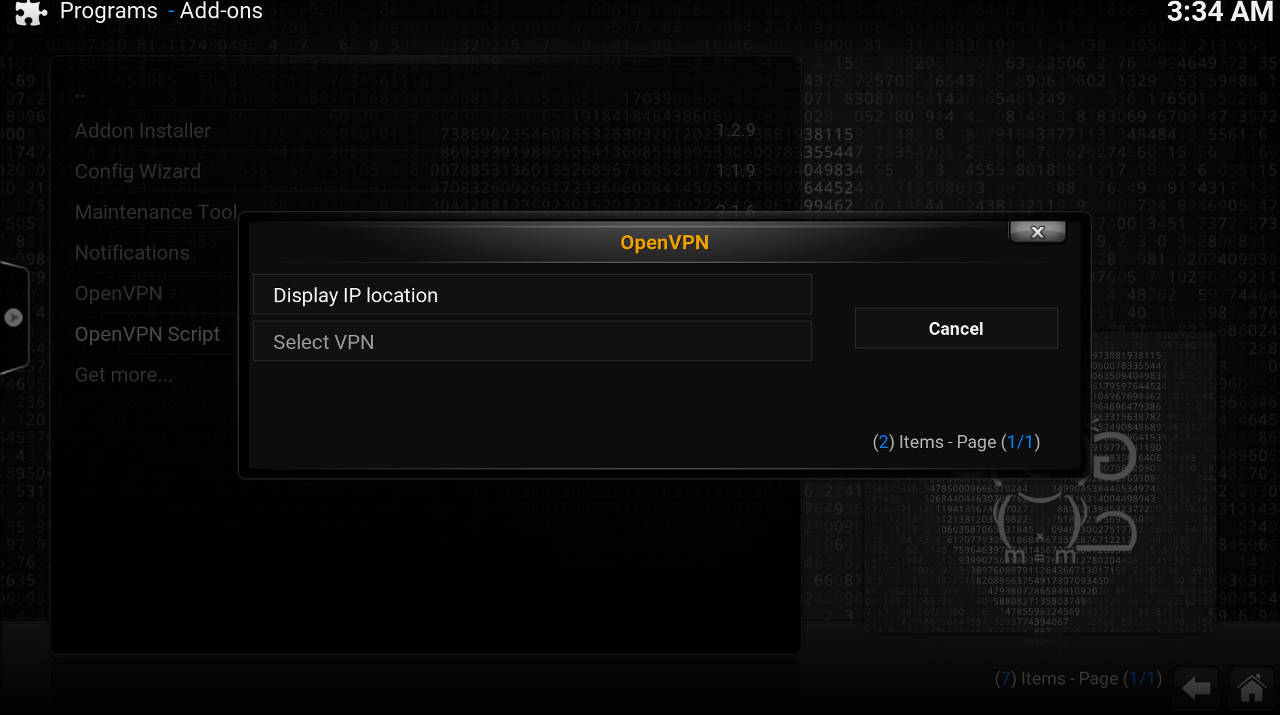 Since selecting options from a list is a common operation, I found it useful to define a generic select function that accepts a specific data structure for options. An option consists of a label, a function (func) to be executed when the option is selected, and a complete function to control flow of the script after an option has been selected.

The example above illustrates the code for the main menu in the add-on. Hopefully it clarifies the use of the complete function, in this case the script will render the main menu again once one of the selected options complete.

It is worth noting that selecting options can be nested. The cmd_select_vpn will in fact display another dialog using the same mechanism.

Some options may take a while to execute, a good user experience will let the user know that something is happening. Kodi provides a built-in busy dialog. To display it whenever an option is selected, the func of that option is curried with the cmd_busy function.

When none of the basic GUI controls are sufficient, you can compose a new window using XML. These files live in resources/skins/default/720p. A good place to start is to copy one of the bundled files in the default skin under /usr/share/kodi/addons/skin.confluence/720p/.

After plenty of googling, I found a way to pass variables to the custom window. Basically lookup one of the predefined windows and set a property on it. The variable can then be read in the XML using $INFO[Window(10001).Property(PropertyName)].

After many infuriating attempts to re-install the add-on after having pushed changes to Github, I realized that Kodi caches the packages locally after the first download. Simply uninstalling an add-on does not remove the cached package. To ensure that Kodi downloads a the latest distribution, delete the cached packages in /var/lib/kodi/.kodi/addons/packages/.